March 10, 2011
For several years now my family has hosted a French Exchange teacher during the month of March (with the exception of this year, as a Russian Exchange teacher needed a home.)  Every year the exchange teachers are ridiculously fascinated with the practice of drinking GREEN-tinted beer on St. Patrick's Day.  It strikes me as hilarious seeing as how when we visit them in France we drink champagne or really exquisite wines produced by one of their family's own vineyards, but when they visit they want to have a GREEN beer?  Anyone else see the humor in this?

It got me thinking about which brewers really are making GREENER beers through environmentally-friendly practices, use of organic ingredients, anaerobic digesters, or GREEN facilities.  Turns out there are MANY brewers out there that I can cheer for from my wine cellar (while I enjoy a good pint here and there, I'm more of a vino girl - blame the combination of my extreme Frenchiness & studying abroad perhaps!)  There was even an article in Photon Magazine (yes, dear Photon Magazine that same one who featured my blog!) about US beer makers using photovoltaic energy.

In the interest of moving along so we can actually get to the business of drinking those GREEN beers, I'll keep it short & simple, and share the skinny on HOW the beer business is going (or has gone) GREEN and examples of WHO is doing the right thing - so that we can of course, support them!

Turns out there are several ways that brewers have implemented being environmentally-friendly, and those practices vary across the globe.  While I don't drink Anheuser-Busch products, owned by a Belgium-based company, they have been practicing GREEN business for a very long time - at least 25 years - longer if you read their website!  They have massive, sophisticated solar arrays and their "Bio-Energy Recovery System" is reported to generate 16-18% of the company's energy at about a dozen of their US breweries.  My understanding of that is that they use micro-organisms that convert/digest waste effluent into biogas which is used to run boilers, which offsets fuel costs and reduces greenhouse gas emissions.  Awesome, right?

On the East Coast we have Brooklyn Brewery who uses 100% sustainable wind power and makes use of their organic waste for farming.  It hadn't occurred to me that organic waste can be sold to farmers for cattle feed, which is a practice also shared by Coors Brewing Company, who also converts waste beer into alcohol automotive fuel and claims to have been on the GREEN scene close to 50 years thanks to their use of recyclable aluminum cans.  They're also responsible for recycling their own wastewater and that of the entire city of Golden, CO.  OK, that's pretty cool. 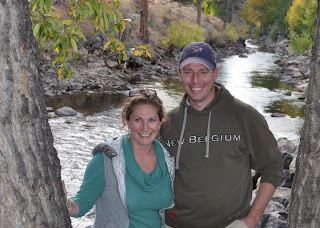 I had never heard of Colorado-based New Belgium beer until my friend in Fort Collins, CO posted pics of her hubby (aren't they a gorgeous couple?  They're probably the coolest people you'll ever meet too!) wearing their apparel a while back (turns out I am the last to know about this GREEN company, and the more I know the more I like them!  When ever I asked someone about eco-friendly beers, New Belgium was the first name to pop up!)  I did know, however, that Colorado is pretty advanced in the GREEN-brewing scene as well as in living GREEN as a general mantra.  New Belgium is known as the 1st US brewery to use wind-power, reuses the methane produced in the water-treatment process to generate electricity & heat, turns waste into cattle feed and does crazy awesome things like ask people to give up their cars for a year in exchange for a cool bicycle.

Other Colorado GREENIES include Odell Brewing Co., who draws from the grid during times to avoid peak energy demand.  They have developed a system that tells them when there is too high demand for electricity and their computers shut down certain features in the brewery in response to that.

Some brewers are using various fuel cell technologies, such as Sierra Nevada & Fosters (yay, those sometimes find themselves in my fridge!)  Others like Japanese Sapporo are using biomass fuels.  In Germany, a company called Felsenbrau Thalmannsfeld is producing a beer (Solarbier) with 100% renewable energy!

I see how this post is getting to be a bit on the long side, so in the interest of brevity, here is a starter list of other brewers giving the industry a GREEN reputation:

Of course there are many, many more, and I will be seeking them out for sure!  I'm also open to recommendations (hint, hint!)

Popular posts from this blog

November 08, 2019
Today's post feels fitting due to the fact that it's November 8th...and yes, we did hug our exchange student!!

I get a lot of questions about how we got into hosting exchange students, and lately everyone asks how it happened that we sent our 15yr old son off for a year to do his own student exchange in France. (Update: he turned 16 in France this Fall.)

It started just about 7 years ago with the Chair of our local Rotary Youth Exchange asking if we'd consider hosting a high school exchange student from Spain. At that time, my own kids were very young...around 6 & 8, and I declined based on the fact that I didn't think we had the kind of lifestyle a young European kid would be looking to experience here (early bedtimes, etc.) The school year went by and we put it out of our heads.

That Summer we spent 6 weeks kicking around the UK, France, and Iceland before coming home right before school started, to find we were being asked again, urgently, if we could provide te…
Post a Comment
Read more

What About That Cork?

Before I got sick I was getting ready to write about recycling and uses for cork.  It seemed as though the universe had been sending me messages about cork.  Um-hum...it's a strange message, but when the universe speaks...well...the GREEN CT Realtor listens.  (Looking back now, it just might have been the fever talking.)

It just so happens that we drink a lot of wine, so as it would be we tend to amass quantities of corks.  For many years we labeled & saved them because I'd seen this gorgeous board made of arranged corks and the DIYer in me wanted to replicate it.  Needless to say, babies came along and my arts & crafts aspira…
1 comment
Read more

I started writing here in 2008. It was surprisingly successful and I really enjoyed my Thursday morning blogging routine. Then, after writing and not publishing the last few posts I wrote back in 2015, I realized that EVERYTHING I wrote felt sad. Between grieving the loss of my father, and the other heartbreaking news we'd received, the sadness and fear bled into my writing. In truth, I love reading other people being honest and open about what they're facing, seeing their vulnerability, but I felt I needed to grieve privately, and I had to protect my brother's privacy because he wasn't ready to tell anyone that he was so sick. 2015 was a really hard year for me, and it was a rainy Autumn afternoon while I was sitting at an open house in Glastonbury that I decided I had to take a break from writing.


Of course I still miss my dad. I ask him to watch ove…
1 comment
Read more

My GREEN Life and Real Estate
East Hampton, Connecticut, United States
I've been a Professional Realtor (R) in Connecticut since 2000, and a parent since 2003. I have an international background and a deep and growing concern for a healthy environment.